Not all dreams are mundane or ordinary. Sometimes our dreams can be quite extraordinary. Extraordinary dreaming may include perceptions that occur outside of the five senses. Dreams in which one is clairvoyant, telepathic, precognitive, lucid, miraculously healed, or shown details of a past existence are just some examples of extraordinary dreams. For clarity, let’s define some terms. According to Dean Radin, Clairvoyance is “receiving information from a distance, beyond the reach of the ordinary senses.” Telepathy can be understood as two minds exchanging information, or the transmission of thought to another or knowing the thoughts of another. Precognition includes foreknowledge of an event, and is sometimes called a premonition. Lucidity in a dream state takes place when the dreamer knows that he/she is dreaming.

Extraordinary dreams may also be highly creative and the dreamer may be shown solutions to challenging problems. In contemporary Western societies, it is commonplace that, when one shares these types of dreams, they are not often believed or well received. After all, contemporary Westerners, typically, have been taught that these experiences are not real or rational, yet, extraordinary dreams have been reported across time and place. These episodes may startle or shake some people; however, extraordinary dream occurrences, especially precognitive (or premonition) dreams, have so much to offer humanity. They can prepare us for difficult times ahead and possibly prevent accidents, illnesses, or disasters. For example, precognitive dreams about 9/11 and the twin tower attacks were shared and some reported them to authorities, yet the dreamers were often laughed at. Instead of prompting action, they were dismissed. For those who want to understand more about premonitions, in general, I recommend Premonitions in Daily Life by Jeanne Van Bronkhorst. Van Bronkhorst (2012) dedicates a section to learning to become more aware of premonitions in daily life along with techniques for “finding premonitions” – one of the four techniques is with dreaming. I introduced this book in September 2016, so it may be already familiar to you.

Some precognitive or premonitions dreams may repeat themselves leaving the dreamer to ponder its meaning. Rebecca had such an experience. It has been unforgettable! With regard to her recurring dream, she told me,

“When I was seven or eight, I had a reoccurring dream. I do not remember much of the dream. I know that it was a little different each time, but the ending was always the same. I was in the middle of the desert sitting on cement steps with nothing else around but the desert. I was sitting on the steps and my leg was on the shoulder of a very large man.”

It wasn’t until Rebecca’s adolescence that the dream made sense to her, but it also left some big questions unanswered. She said:

“When I was 16, my parents sent me on a wilderness survival program, one of those tough love things for ‘bad kids.’ I was in Big Ben National Park in Texas, in the desert. I fell within my first few days there. They would not pull me out of the program to take me to see a doctor. I had to hike around for another couple weeks all day, every day. My ankles were the size of grapefruits. I was in a lot of pain. They told me I was a wimp and to quit whining. Finally after nearly 3 weeks, they brought me into base camp. It was just a trailer in the middle of the desert with some cement stairs leading up to the trailer door. There was nothing else around, just desert. There was not even a road. I sat on the cement steps with my leg on the shoulder of one of the workers while he wrapped my ankles in ace bandages. He was a very large man. This experience was just like my dream. The dream I had had about 8 years prior. That really got me thinking. Here I was at a tough love wilderness program for bad kids at 16, I dreamt this around the ago of eight… Was I destined to be a bad kid? ”

To this day, Rebecca asks herself that question – was she destined to be sent away on that program…to be a bad kid? What might these types of dreams imply about destiny, self-determination, one’s fate, and Western concepts of time and space? Could this dream have helped to serve Rebecca as a kind of mental and emotional preparation for what was to come?

Some of these particular types of extraordinary dreams can obviously overlap; thus, they are not easily compartmentalized. In the Dream Laboratory of the Maimonides Medical Center in Brooklyn, years of experimental research into dream telepathy was conducted in the 1960s and ‘70s. From those studies, certain telepathic dreams also appeared as precognitive. For details, read Dream Telepathy by Ullman, Krippner & Vaughan (2002). A single dream may contain 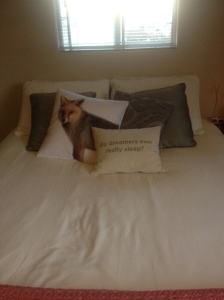 elements of telepathy, clairvoyance, or more. Bernard Gittelson reported a case by a woman on a farm in Oregon:

At 3:40 A.M., the woman suddenly awoke by the sound of people screaming. The sound quickly vanished, but she felt a smoky, unpleasant taste in her mouth. She woke her husband, and together they scoured the farm but found nothing irregular. That evening on a television newscast, they heard about a plant explosion that started a huge chemical fire which killed six people. The explosion
had occurred at 3:40 A.M. (as cited on page 92 of The conscious universe: The scientific truth of psychic phenomena by Dean Radin, 1997).

I don’t come across such profound dreams as these often, but when I do, they are not quickly forgotten. When one has an experience like this, I imagine that trust in dream wisdom rises to another level entirely.