We are living in a world lacking balance. This is especially true in modern Western society where patriarchy has imposed definitions of what it means to be feminine. I write from the United States, so my views are birthed from a lifetime of living in this nation. While living in this nation during this era affords so much, it lacks something 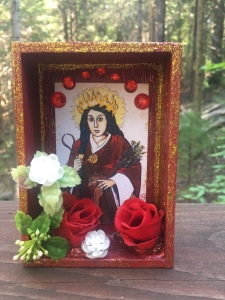 deeper, something critical for long-term survival and prosperity. This lack is rooted in the spiritual (not to be confused with religious dogma). We have collectively lost our divine feminine soul.

When we talk about the divine feminine or feminine energy, we are not talking about gender. We are also not talking about modern depictions of women in media who often come across as insecure, jealous, sarcastic, competitive, bitter, resentful or catty – anything but harmonious or spiritually developed. What we are talking about are concepts beyond that, such as creativity, flexibility, wisdom, intuition, community relations, compassion, empathy, sensuality (senses not thought), cooperation and 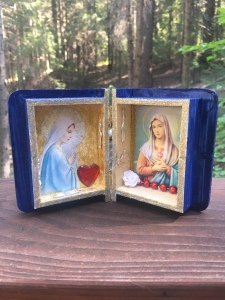 collaboration. Those qualities enliven feminine energy and when they are lived through the body and move the spirit, we touch the divine feminine.

When it comes to the feminine, it’s easy to lose touch with this part of ourselves. Masculine energies are highly rewarded in this society and have been for a couple thousand years now. Nothing is wrong with these energies when they are in balance with the feminine. As the first sentence highlighted, we are out of balance. Not all is lost though, as we have an opportunity each passing moment to reestablish equilibrium.

The seven years I spent doing doctoral work alone left me deeply rooted in the head, even though the program was somewhat balanced in that my clinical psychology concentration was somatic psychology – a highly intuitive embodied practice. That said, my personal journey to further restore a masculine-feminine energetic balance has led 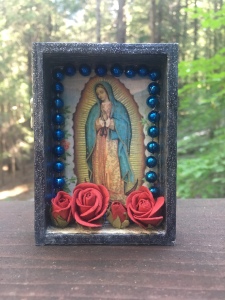 me in a few directions. I had found myself drawn to meditate on the Goddess: Gaia, Brigid, Diana/Artemis, among others – this surfaced years ago. This year, I have returned to bring home an aspect of my Roman Catholic roots. That is turning my attention back to the Blessed Mother, Mother Mary, the Madonna. In addition to meditation and contemplation, I have opened myself to a kind of creativity that blends these ingredients by crafting small shrines in Her honor. As a longtime artist and craftsperson, I see how my consciousness shifts when I get into ‘the art zone.’ Time freezes, senses come alive, thoughts cease, and something bigger opens. This is just my current way of doing things and experiencing the mysteries of the process. I am no expert when it comes to the Divine Feminine. Like everyone else, I search for meaning.

While my story and my journey are incomplete (is anything ever complete?), I hope it, along with the photos of my work, inspire you to reconnect to the feminine energy within, in your own unique way. We can revive, reunite, restore and rebuild at any age, at any time. It’s not gone, although sometimes it gets lost. I want to proclaim that we, as humans, have created a balanced world, but I cannot — At least not yet. What are you doing today to bring more balance to your one-of-a-kind life and to this beautiful world?

After the annual international dream conference of the IASD, held in the Netherlands this year, I visited Greece. Greece has been on my bucket list for over a decade. Finally, I made it! With only five days to spare, I stuck to the North East area of the country, exploring the city of Thessaloniki and Halkidiki peninsula. Time in the sea was, of course, a must. I also  wanted to see with my own eyes evidence of a long lost dream culture. 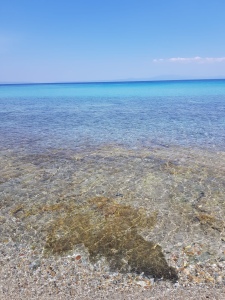 I spent time speaking with young Greeks, and even a few older ones. As I walked through downtown Thessaloniki, not for from Aristotle Square by the sea, I walk past 4th century monuments and wait…what?… yes, vendors selling Native American dreamcatchers. What a surprise! Young, contemporary Greeks call these oneiropagida yet they do not have a similar object from their own, forgotten, ancient dream-focused culture. Evidence for this lost culture is mostly found in museums nowadays, especially within the boundaries of my recent trip. One man, who is in his 20s, shared two opposing views of today’s Greek people. Dreams either mean little-to-nothing, he told me, or dreams must be interpreted, as they hold significance for some. For the latter group, oneirokritis or dream dictionaries, however, are popular. He considered those who use dream interpretation to be “superstitious,” yet as we spoke further, I understood that this term was not necessarily negative. The 21 year-old woman who was selling dreamcatchers, among other objects and souveniers, told me that for her and her friends, dreams were not meaningful. She said that her mother, however, carries a belief that night dreams are worth paying attention to and may lead to an action if they seemed meaningful. This isn’t a daily practice though, as some dreams hold more weight than other dreams.

A middle-aged cab driver from a small mountain town told me that contemporary Greeks today look at the old God/Goddess culture as “fairytales.” That old mythology is not a part of our contemporary belief system whatsoever, he conveyed. With regard to dreams, he said that this is also mostly ignored, yet for some Greeks, “powerful dreams” are given more attention. Those vivid, or easily recalled, types of dreams may need interpretation. The dream may be placed in one of two categories: good or bad. Dreams are judged, polarized, it seems. An example of a good dream may involve flying, he said, while a dream of a snake may be viewed as bad. I commented on how serpents were held in high regard, in the past, for their healing and transformative qualities. He agreed, but said “times have changed.” He attributed this shift in perspective to religious changes, particularly the rise of Christianity. 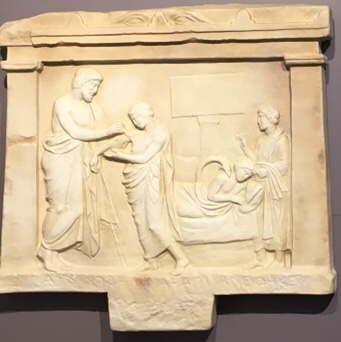 information about the healing nature of snakes as we looked at a marble relief being sold there, which features Asclepius. A fourth century BCE relief depicts three stages of healing of a patient by the god Asclepius with two apotropaic eyes above. The healing ritual shown here appears to depict Asclepius giving injections and using snake venom as a healing substance. Some believe that Asclepius could transform into a healing serpent himself. The original can be found in the sanctuary of Amphiaraos at Oropos (Attica). Apotropaic magic refers to the power to avert evil or harmful influences, bad luck, misfortune, or the evil eye. Its popularity is evident, even today, by the vast number of apotropaic amulets sold worldwide. Other copies of votive offerings to Asclepius also feature the serpent. Snakes can be found in numerous pieces 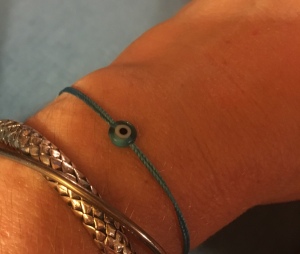 of jewelry (bracelets and earrings in particular) worn by the ancient Greek/Macedonian peoples. We discussed how the serpent, or snake, was considered a strong healing, transformative force historically, yet with the arrival of Christianity, this all changed. From then on, snakes were primarily associated with women and evil, or the devil, thus connecting the two. This myth continues to hold strong today. Then, she asked for me to help her understand a puzzling dream of her own. I say that I’m honored to listen, but cannot interpret another’s dream, as I am not the author of it. She agrees that dreams belong to the dreamer, and continues. We play the game, “If it were my dream,” and have an enlightening discussion. She smiles as her eyes widen, 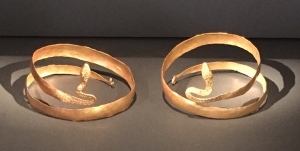 expressing thanks for my view on this dream, as if it were my own, revealing a positive resolution in the end. Dreams belong to the dreamer, yes, and isn’t it wonderful to have those that will listen and take them seriously. For these exchanges offer fresh insights and perspectives. I was delighted over my time spent in the museum and with it’s employees – they had much to say about Asclepius and healing, while the others I spoke with knew little, or nothing at all of that part of local ancient history.

My time in Greece will continue…hopefully within a year or two. Athens and the oracles and sanctuaries of the area are at the top of my list. Have you traveled to the ancient Greek regions where healing and dreaming were once so common? If so, tell us about it. Comments and discussion here are always welcome.